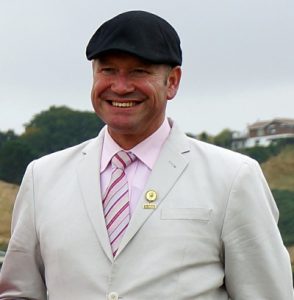 Ben commenced in the sport of pure breed dog exhibition with pugs in 1984 and continues to campaign his multiple Best in Show winning pugs under his ”Obsidion” prefix.

Ben, together with his partner Rodney own and operate a boarding kennel located in Adelaide, South Australia where they breed and campaign Pugs, Sharpei, Basenjis and Siberian Huskies. Siberian Huskies are a more recent breed interest for Ben and Rodney with their first introduction being the beautiful Canadian import, Lilo (Aust Am Can Ch Anuniaq Lithium (imp Can)). Having campaigned Lilo successfully to his Australian title within 2 weeks of exhibition, Rodney and Ben were quickly considered strong competitors in the breed and became the recipients of three of the late Cheryl Le Court’s beautiful Suthanlites bitches. Ben and Rodney now breed and campaign their beautiful Siberian Huskies under Rodney’s “Miniatura” prefix.

Ben attained his ANKC All Breeds Conformation Judges License in 2008 and since that time has judged in New Zealand, Canada, Sweden, Finland, Thailand, China and South Africa.

Ben has had opportunity to judge and critique many breeds including Pugs and Siberian Huskies in several countries including Australia. Ben is also one of Australia’s top handlers and has judged many junior handler competitions both in Australia and abroad.

Due to the widespread Covid-19 pandemic, all Club events have been cancelled for 2020 and possibly beyond.  A calendar of events will be included when these have been finalised for 2021 – 2022.