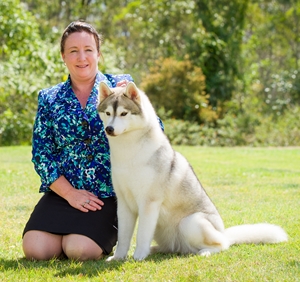 I purchased my first Siberian Husky in 1999 and was told they don’t do u turns! I soon understood the full extent of this statement!

I than began my show career and I also began to dabble in some sled racing.

My second Siberian Husky Gr. Ch. Volku Whispering Dreams was the grounding in our beautiful breed for me. She stole my heart and spent two weeks shy of 16 years in my life.

From here I have been very lucky to be part of Utopialand Siberians experiencing dogs like Gr. Ch. Utopialand Caesar (AI) and Sup Ch. Utopialand Isabella. Isabella took me on an incredible ride to the top award of Top Rising Star All Breeds in Australia.

I have had the pleasure of handling Siberian Huskies in China and Thailand.

During my career I have had breed involvement in Samoyeds, Rottweilers and Dobermans.

In the later years I have imported two dogs from Winter Melody. My import Sup. Ch. Winter Melody Your Miss Trouble Imp Poland was number One Siberian Husky in Australia last year and number One Utility Dog in Queensland.

Our breed is a wonderful breed and I look forward to many more years with them.